You don’t need to be an artist to be creative, and being an innovative and imaginative filmmaker doesn’t necessarily mean you can draw the most detailed, understandable storyboards. 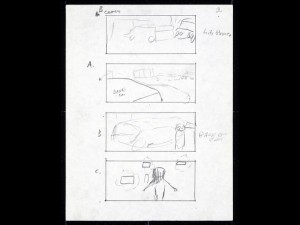 Recently, the Academy of Motion Picture Arts and Sciences released the Production Art Database, where the public can view production documents such as costume designs, production designs, animation art, storyboards and paintings from some of the most revered films of cinema.  Among them, artwork from the industry greats such as Steven Spielberg have been displayed.

Steven Spielberg is arguably one of the most prolific American cinéastes, but that doesn’t necessarily mean he has the talent or time to draw storyboards.  The storyboards for Poltergeist certainly did their job as the film was a worldwide box office success! After he created Dreamworks, his team began to use our StoryBoard Artist Studio software, which we also customized for their animation department.

Clear, great-looking storyboards are an irreplaceable tool in communicating visually.  When it comes to making pre-production illustrations that accurately depict your unique visions, there’s none better than StoryBoard Quick and StoryBoard Artist. storyboard software.  The built-in artwork and image import capabilities of Quick and Artist allow anyone to make specific, artistic storyboards without ever touching a pen!