Master Documentarian Ken Burns shares his love of story with up and coming filmmakers.

“The whole is greater than the sum of the parts…”

In a short video, Ken Burns explains that while logically we know that 1+1=2, when it comes to telling a truly great story filmmakers should be looking for a 1+1=3 equation. A story where that extra, potentially unseen, element “love”, “god” or “reason” is what truly matters most to the audience. A story where the whole is greater than the sum of its parts is what is required for a more engaging tale.

Burns finds that sometimes a complicated tale is the tale that’s most worth telling.  For example, provide rich characters who are good but flawed and villains who have identifiable motivations. Because this will connect with the audience.

Emotional truth must be earned

Most of all, Burns understands that films -and as a byproduct, the stories they tell -are manipulations. Even though that word has negative connotations, it’s not necessarily bad.

As a filmmaker, Burns looks to move his audience through sincerity and truth. Consequently, he utilizes his truth to connect emotionally with his audience and build a story that is transcendent. And most of all, a story that reminds us that it’s OK to be human.

Watch the full video of Ken Burns passionately talking about his love of story in the clip below.

Ken Burns uses archival footage and photographs in his documentary films. Enlivening still images through use of a panning and zooming visual effect in video production has become known as the Ken Burns Effect in the Apple world.   Steve Jobs wanted to add that feature to Macs and persuaded Burns to see things his way.

PowerProduction Software’s use of digital pan and zoom technology in StoryBoard Artist pre-dated Steve Jobs licensing Burn’s name for Apple’s use. But you can call it Pan and Zoom…we still do. We used to wonder where Jobs got his ideas…well, we know where some of them came from!

More info on how that came about,  in an interview by Carl Quintanilla of CNBC. “Binge”

Finally, if want to create an enhanced ‘pan and zoom’ effect (a/k/a ‘Ken Burn’s effect’) on your next storyboard project, check out this feature in StoryBoard Artist storyboard software where objects can now move within the pan and zoom. 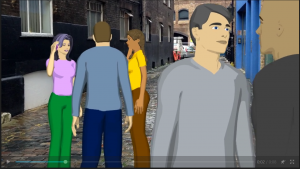 To tell your compelling stories, check out PowerProduction’s line of storyboard software and start your journey to making better movies today using techniques like Ken Burns.