Shot Types to Use in Storyboards

What is the Language of Film and Video?

The first steps in the production of a film or video is to learn the visual language of moving images. Great film and video storytelling requires knowing the language of film and when and how to use it. Professional film and video productions assign names to commonly used shot types. Knowing these terms save time when communicating with the crew and are part of “film grammar.” Using these camera shots, combined with perspective tricks, enables you to plan out your scenes in an easy-to-read visual shorthand.

One goal of the director/filmmaker is to visually guide the audience’s attention to “where to look in the frame” in order to hold their attention and move the narrative forward. (i.e. showing or revealing the most important story information at the appropriate moment). 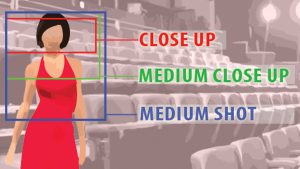 Shot types are described in relation to the distance between camera and the MAIN “subject” in the frame. [We used a character to illustrate shot sizes but shot types also apply to framing a prop or location.]

Shots and camera placement can be used to communicate extra meaning which deepen the audience’s emotional engagement with the story.

What are the basic camera shot types?

In addition to shot types, there are short cuts to communicating camera placement of the shots.  These too, can have emotional implications for the audience.

A shot is described as a single take. In cinematography, a take refers to a filmed “version” of a particular  “setup.”

When storyboarding, a frame represents a single setup or shot. Each storyboard frame (a/k/a panels) communicates the major action or essence of the scene.

In film, a sequence refers to a series of scenes forming a distinct narrative unit most often connected by a unity of location or a unity of time.

Storyboarding a complex scene or sequence where the action extends to more than one location,  multiple frames are used to represent the action.

Ultimately, getting your audience’s attention begins with a compelling story.   The story can be visually supported and emotionally punctuated by the composition of the shots.

Supporting the emotional narrative of a story

The goal of shot choices is to tell the story and solicit an emotional reaction from the audience.  Deepening the emotional connection is accomplished with the choice of shot types in a sequence and knowing when to use them.

When storyboarding, notice that the length of the sequences also creates a rhythm – a visual rhythm. This can be planned with storyboards and tested with animatics.  The actual story rhythm is accomplished during editing in post production.  However, you can’t edit in what you don’t shoot. And you can’t shoot something if you don’t know you need it. How’s that for some creative logic.  So a good visual plan is a good start.

But it all starts with ‘visualizing’

Visualizing is the process of  ‘imagining a goal’ while actually working toward a opportunity to review and refine it.  Storyboarding has become the workhorse of the pre production phase.

Finally: Show vs tell.  Use dialogue sparingly wherever possible. For great film and video storytelling, knowing the language of film and when and how to use it is valuable. Remember to show the story, show the emotion and show the events with imagery rather than using “talking heads” of people telling the story.

Bottom Line:  Storyboards are a great first step to take after finishing a great script.

Read more about How To Storyboard