Sure, you can just wing it when you get on location but when you do that, you’re missing the opportunity to do something great. You can luck into a great shot, or learn powerful shot design. Why take a chance? Take a few minutes to look beyond your location, beyond the action of the characters and ask yourself one question. Who’s the person in your shot you want the audience to feel for? And what do you want your audience to feel? Then think about power* as you storyboard and design your shots. 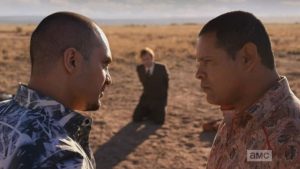 but there’s a catch…

If you don’t know what you want people to feel when they watch your story, then stop everything …figure that out first. Once you know that, then start to think deeper about your shot, your scene, your story.

How can you do that?

Ask yourself: Does your main character command the scene? Shoot them in a power position.

Are they struggling emotionally? Put the camera in a place that shows they have to work harder. If they have an epiphany, then show them cross the stage line. See them turn, see them change. It’s a visual medium right?

Sounds old school. But the media we now call ‘Videos’ used to be called ‘Movies’ (or moving pictures). They’ve been moving characters and emotions for more than 100 years. Best to learn the basics. And practice them. Because they still work!

You may already know that if you shoot someone from below it makes them seem more powerful, right? The Hero Shot! Or shoot down from a higher angle to make them appear smaller and less powerful, etc.

But did you know that if you want your protagonist to struggle harder, make him move right to left across the screen. Since our eyes move left to right (like for reading), then facing against that natural movement automatically feels harder for the character. And when we’re involved in a character/story we put ourselves in the character’s shoes.

These power theories of are called proxemics*. A big word that means: emotional space. We deal with proxemics every day in our lives; how close we are to each other, how we touch, if we touch, how we communicate with space and others around us. On screen, the effects are even more pronounced while proxemics are expertly manipulated by the most famous directors, cinematographers, and editors.

Think of your favorite scenes and watch them again. One. Shot. At. A. Time. You already know the emotional content, so for each shot ask yourself, ‘Why is the camera placed there?’

For example, in a recent favorite show of mine (Better Call Saul) there’s this shot.

Which exactly matched what we felt about our character in the shot. 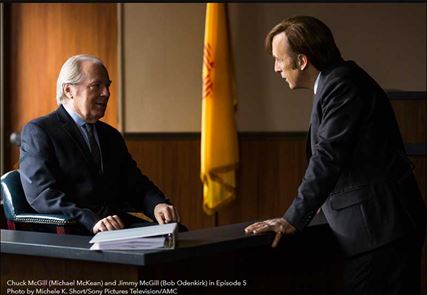 And then there’s this simple looking courtroom scene. In the beginning of the scene, the witness is in charge. Looking left. Attorney struggles against. Looking right. Background calm.

By the end of the scene, the witness breaks down. Struggling, now looking left, against our eyes, alone in frame. Background harsh, high contrast and dramatic.

Why does this matter?

The language of communicating emotion

Think camera placement and shot design is accidental? I’m reading too much into these shots? Whether the professional director chooses these things consciously or instinctively, no matter. The language is there, and it adds to the emotional content of every shot. 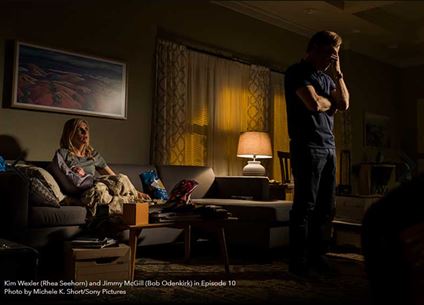 How about this one: Looks simple enough.

Camera is low so shouldn’t the guy on the right have the power? Actually, the woman is in charge as the guy struggles in this Full Shot/Two Shot.

Of course the actor’s body language conveys a lot, while the director amplifies his angst with the camera placement. It’s also about the staging: distance between characters, frame edges, angles, lighting and more…

In fact, try it yourself with your favorite scenes. You’ll be surprised what you can see when you study a sequence of shots. Then apply what you learn to your next project. Really think. Like it or not, every shot is important. Plan your shots for the greatest emotional impact. All directors do it. And the best do more than just think about shots. They storyboard shots because they want their stories to be the best.

*Proxemics is the study of space and how we use it, how it makes us feel more or less comfortable, and how we arrange objects and ourselves in relation to space. The term was coined by the anthropologist Edward Hall. Hall was interested in understanding how humans use space in communication.