The human attention span is now shorter than a goldfish’s….about 6-8 seconds. And there’s a lot of stuff in the world trying to get our attention. Whether you’re making a short film or long video, it must compete to get it.

Start a project with an exciting shot

Starting your project with a boring establishing shot was fine for last century, but not anymore. Good first shots are unique. Capture my attention. Compel me to watch. Don’t let me look away.

Ever notice that you can tell when a film is going to be good in just the first few seconds? Or is that just me. If you put thought into the very first shot, then your video will take a big leap up in quality. That’s the secret, now here’s how to do it.

Make it a mystery

Think of your video as a mystery that you’ll unfold in a unique way. Your shots are the elements you use to communicate bits and pieces to us. Your audience will assume a lot from what’s inside your frame. So make every shot count, especially the first one.

Think about your story. Think about what’s most important. Then show us, just a piece to start. Storyboard your first shot. Better yet, storyboard several ‘first shots.’ It’s the pro’s way to brainstorm ideas. Then step back and review them. Next, try another and another. You’ll find that you may be able to use these thoughtful shots in other places in your project.

The easiest attention-getting shot is the CLOSEUP. Maybe your first shot starts on a closeup of something relevant to your story.

A closeup is a tight shot that points to something important that you want the audience to see. Often this type of shot is a highly dramatic shot. But too many closeups can lose their impact. Too wide all the time and you’ll lose the audience to lack of focus. So by starting with a closeup, you’re telling the audience to pay attention, ‘this’ is important.

We can wonder “what is that?” at least for a moment. Then reveal more information, until we get it. Make us work for the meaning. It will keep us engaged, and keep us watching.

To be a real pro, your first shot will also tell the story of the entire movie, but let’s start with creating a shot that at least will hold our attention. 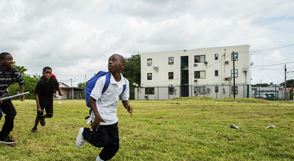 Start on a Wide Shot. Wait, what? Didn’t I just indicate not to start with a boring establishing shot?

Wide shots typically set the scene by telling us the time and place. These shots are usually not too tense by definition, because we are farther from the action. But what if the angle is super low and your main character drops into the frame with a thud. Or suddenly looks directly into the lens. That type of developing wide shot with action can take your first shot to the next level. We will immediately start to guess: ‘what’s going on?’ Perfect! You’ve got my attention.

Another idea is to think about your story as a single frame. What if you had to tell your story in a still image? Who would be in the foreground? Where would they be? 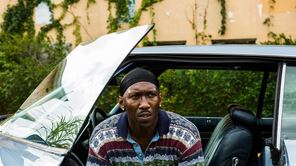 Plenty of projects start with a medium shot. This type of shot is considered neutral: about waist up on a character. Not too tense, not to relaxed unless you get creative. What if your character is hiding in a closet but we hear strange noises outside. A medium shot can becomes compelling too with some planning.

Of course every shot is important, but really concentrate on a great first shot. That’s the one that will elevate you. That’s part of the language of moving pictures. Everyone knows the language when they see it. It’s your job to use language to the most powerful effect. Use all your best shots. Keep us interested.